We are pleased to share that The Marc Bolan School of Music has recently completed a documentary film on water and sanitation, which will be available for viewing soon. There are currently ongoing discussions regarding its distribution, with plans for an awareness campaign focusing on film screenings, poster production, and TV and radio broadcasts. (May 2022)

We have identified several film festivals through which we hope to distribute Di Kombra Di Krai (Cry of a Mother) to wider audiences, one of which is the Sierra Leone International Film Festival. Future View Media Centre has also agreed a deal with AYV to broadcast the film on DSTV, a digital subscription channel that covers many parts of Africa and is available worldwide online. The film has also been shown as part of a screening to students in Port Loko, with another few screenings scheduled to follow soon. (May 2022)

The pilot school screening programme in Kasungu has been successfully completed for The Kasungu Film Collective’s Covid-19 schoolgirls documentary. Alfred Mtapaonga, our local distribution manager, submitted a detailed plan and budget to extend the school screenings further, including in the programme for our short film on Albinism, which is now underway. As part of this programme, Alfred will be encouraging the schools to identify actions they might take in response to issues raised in the films. Actions proposed will be assessed through subsequent visits to selected schools. This is a small step, but one we hope to build upon in the future. Even just one instance of a school taking action in response to the film could prove massively helpful to the community. (May 2022)

Progress continues with regards to the feature film on Albinism, with training in planning and script writing ongoing with demonstrations provided by our Director of Film Training and Production, Rick Elgood. Rick is also visiting Kasungu, Malawi this month to meet the team in person for the first time and support the team in the planning and production of the short film ‘Beyond Sight’, which highlights the struggles of the visually impaired in Malawi. Whilst there, Rick will be providing hands-on tuition in the whole production and postproduction process, which will include training in sound production and mixing. We are excited to share Rick’s updates with you here and across our social channels. (May 2022)

We have recently delivered a pilot community-based screening programme in and around Kasungu through Uhuru Child Care, a local NGO focused on meeting the needs of children with cerebral palsy and supporting their families. Following training in its use, a mobile screening kit was loaned to Uhuru Child Care to continue the screening programme under their own steam. They have since completed a further two screenings and continue to make use of the film in their outreach activities. You can view Chosadziwika here. (May 2022)

Our training group at Chorus Box in Kenya has completed their first module, which delivers a training programme to a group of youths and provides a creative space for young people.
The group has been established by Peter Bwire, a young Kenyan filmmaker who is currently using his skills to support youth engagement in community development activities in and around Kitale, Kenya.
The next step for Peter and the group is to start outlining possible options for a short dramatic film that focuses on key issues in the local community. Watch this space! (May 2022)

We are very excited to share our brand new Annual Report for the year 2021. The report is jam-packed with details on our operations in 2021, what we delivered, and what we have to look forward to in 2022. Hard copies are being mailed to individuals on our existing distribution list, if you aren’t on the list and would like to receive a hard copy, please email us at: admin@purplefieldproductions.org. (February 2022)

Currently, PFP is supporting in the production of films and training of filmmakers in four African countries, so a Christmas puzzler set in Africa seemed like a good idea.
Please enjoy this testing quiz and watch this space for answers to be posted after Christmas. (December 2021)

We would like to express our gratitude to everyone who participated in our African Christmas Puzzler.
We are delighted to report that a fantastic £490 was raised, which will be put to use on some major PFP projects this year. Thank you very much. (January 2022) 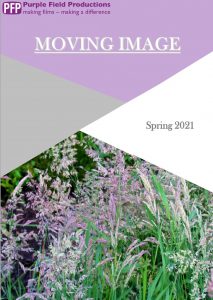 As the latest advice and news regarding COVID-19 continues to evolve quickly, PFP continues to closely monitor and respond to the situation and the impact on the people and communities we work alongside.

PFP clearly has an important role to play, and our recent experiences in co-producing COVID-19 awareness music videos, have demonstrated that we have the capability of operating even in the most trying of circumstances.

As an organisation we have supported our partners Future View Media Centre (FVMC) in Sierra Leone and the Kasungu Film Collective (TKFC) in Malawi to produce heath awareness music videos in their local languages.

Additionally, members of TKFC have been undergoing PFP supported training, covering film scripting, production, sound recording, and editing, which has led to the production of a short documentary on the effect of COVID-19 on schoolgirls in Malawi. (December 2021)

Stay up-to-date with advice from the World Health Organization (WHO):

WHO Regional Office for Africa

PFP Summer Quiz Night – We hosted a virtual summer quiz via Zoom in aid of our Safe Motherhood Project in Sierra Leone. Thanks to everyone’s generous support we reached our appeal target which will go towards distributing the film around communities in Sierra Leone.
If you’d like to find out about our Safe Motherhood Project you can read more here.

Buy a face mask – Sewing machines have been whirring overtime as a group of Ilminster volunteers get to work producing face masks — over 500 so far. These are now available to the public from the Silver Street Dairy and the Green House in Ilminster in return for a donation — 50% of which goes to PFP’s COVID-19 work in Africa.

We are pleased to report that the Marc Bolan School of Music (MBSM) have progressed from their 3-minute competition and are now working on a new 20-minute documentary. The current proposal is to produce a film on rural health and sanitation. This is a topical issue that has become of heightened importance during the current pandemic. MBSM will focus their efforts on local community distribution, and PFP will take responsibility for broader distribution through broadcast media and organisations. (October 2021)

Sierra Leone has the highest rate of maternal mortality in the world, with 1,360 mothers dying per 100,000 live births (by comparison, the UK figure is 3.25 per 100,000). This shocking number of deaths is due in part to a shortage of hospitals, trained staff and ambulances. But lack of education also plays a part: and that’s where film can help. PFP & Future View Media Centre (FVMC) in Sierra Leone have now finished filming Di Kombra Di Krai (Cry of a Mother). You can view the film here. (October 2021)

We are currently making good progress with the distribution of our COVID-19 schoolgirls documentary, produced in partnership with The Kasungu Film Collective (TKFC). The initial focus has been on TV broadcasts, a pilot screening programme in local schools, and distributing DVDs/memory sticks to the government and NGO stakeholders.
Screenings have taken place in 5 secondary schools included in the pilot. At Chilanga, Kasungu C.C.A.P secondary school and Mphombwa, the film was shown in a classroom setting and in the school hall at Chankhanga. The process has reached an estimated 700 children.
Feedback from the team indicates that the screening process has gone very well, with positive responses from pupils and teachers. You can view this documentary here.
We shall soon be embarking on training in screenwriting in preparation for our anticipated upcoming feature film on Albinism. We are currently in the process of assembling  team of local screenwriters, which will include Jonathan Mbuna and Aaron Mhone, who PFP have enjoyed working closely with before on other projects in Malawi. (September 2021)

We have exciting news from Kenya where we will be delivering our unique training programme to a group of school-leavers/out of school youth through “Chorus Box”, a creative space for young people established by Peter Bwire, a young Kenyan filmmaker.  Peter is highly committed to using his skills to support youth engagement in community development activities in and around Kitale.
We are hopeful this could lead to further opportunities for the PFP training model to be rolled out to other counties in Kenya. (September 2021)

The programme consists of the following modules:

Over the past month, we have resumed more regular contact with our friends at ADD International who have indicated they are keen to organise a further screening tour of Lisilojulikana in Pwani District.
In the hope that we may work more closely together, we have taken the opportunity to ask ADD to reflect on how film/media has impacted their work so far, and how we can use film to support their future programmes. (October 2021)

Our latest project updates and news including:

Any cookies that may not be particularly necessary for the website to function and is used specifically to collect user personal data via analytics, ads, other embedded contents are termed as non-necessary cookies. It is mandatory to procure user consent prior to running these cookies on your website.